TALLAHASSEE, Fla. - Despite emotional testimony from Democrats and civil-rights groups, Florida's Republican lawmakers voted overwhelmingly to pass the so called "anti-riot" bill in the wake of last summer's racial unrest.Gov. Ron DeSantis and Republican lawmakers such as Senate bill sponsor Danny Burgess - R-Zephyrhills - decried the destruction of property for those marching to protect Black lives.

Attorney Mutaqee Akbar, who is president of the Tallahassee branch of the National Association for the Advancement of Colored People, said that argument is a smoke-screen to silence the 93% of peaceful protest against the police killing of unarmed Black individuals.

"There are already laws on the books for people to not to destroy property or anything like that," said Akbar. "So I'm not sure what this law is necessarily going to do other than send the message that they don't care about what people have been crying about."

The bill was fast-tracked to bypass roadblocks. One Republican, Sen. Jeff Brandes of St. Petersburg, voted against the bill in the 23-to-17 vote.

It now goes to the governor, who will sign it into law to take effect immediately.

While some Republican lawmakers acknowledged the racial undertones in the bill, allowing for a study on the racial impact to go forward, Akbar said he believes it will suppress Black and Brown people and allies from showing solidarity.

He recalled seeing first-hand when members of his family avoided the unfair consequences of showing up and speaking out.

Among many things, the bill grants civil/legal immunity to people who drive through protesters blocking a road. It says people arrested can't post bail until their first court appearance, and there is a six-month mandatory sentence for battery on a police officer during a riot.

After passage of the contentious bill, several Democratic state senators held a press conference wearing black t-shirts in protest. They said they were barred from wearing the shirts during the debate by Republican leadership because it would violate the chamber's decorum. 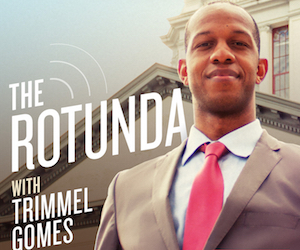